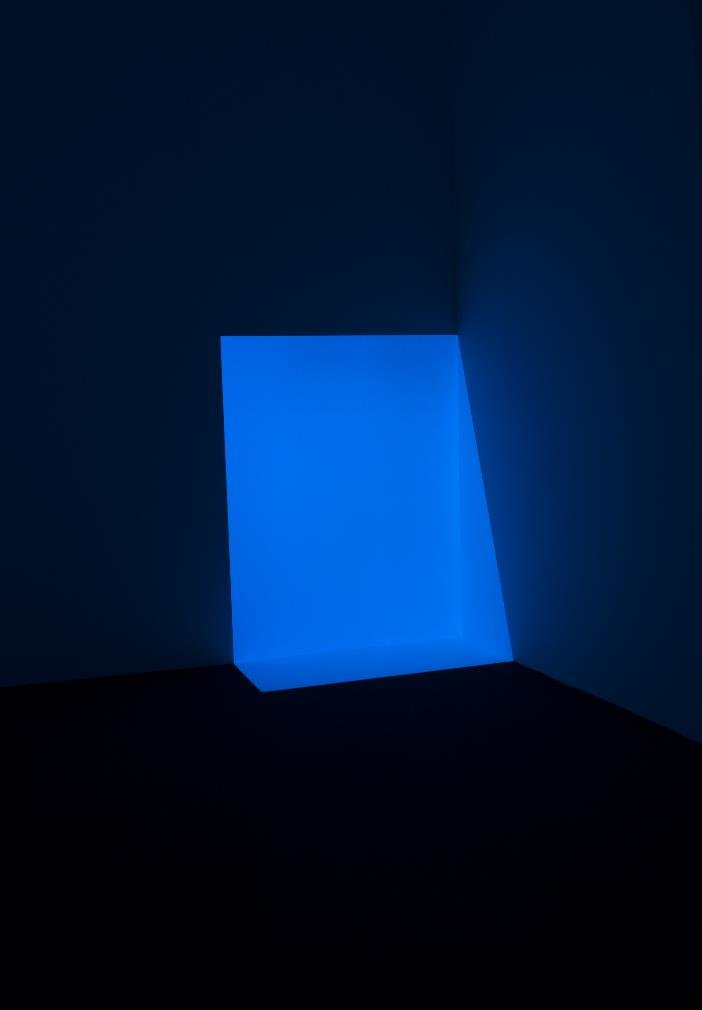 Sa Bassa Blanca Museum is richer of one art highlight, installed in the Sokrates Gallery in spring 2017: The installation of James Turrell`s piece "Juke Blue" (1968). 49 years after its creation, this emblematic artwork reaches Mallorca, offering the exceptional opportunity for the visitor to enjoy this wonderful piece. A unique experience that will immerse the spectator into a deep state of contemplation, specific to Turrell’s works. The work on display is a clear reflection of his vision.

My desire is to set up a situation to which I take you and let you see. It becomes your experience.

The theme of the museum's gallery Sokrates revolves around the installation inspired by Einstein's formula that defines the relationship between Space and Time.

It is a place that requires us to rethink the traditional Museum concept, introducing us to other ways of presenting art and the interrelation of space and time. Here we find a museum presentation focused on the concept of art in a linear fashion, and striving to create links and spatial-temporal connections.

Space, in which cohabit works from very distant places and times, but that in a very particular way generates a dialogue and develops a discourse based on complementarities and entirety. The ethnographic pieces interact with contemporary works following the concept of the exhibition "Primitivism in 20th Century", produced by MOMA in New York in 1984 curated by William Rubin and the exhibition "The Magicians of the Earth" by Jean-Hubert Martin, at the Centre Pompidou and la Villette in Paris in 1989.

This underground room hosts a spectacular crystal curtain by Swarovski, composed of 10,000 pieces, a backdrop to a complete fossilised skeleton of a Siberian woolly rhinoceros (Coelodonta antiquitatis) dating from the Riss-Würm upper Pleistocene interglacial period.

Our initiative to bring to our visitors’ attention the dire pollution and terrible effects of global warming began with the intervention by Dolores Vita called CO2, that can be seen on the wall of the Sokrates space; it continued in the Sculpture Park by the intervention of the Moroccan group ‘Z’Bel Manifesto’, created with the plastic waste collected in a single day in Alcúdia town.

Now our focus on Non-European artists working on this theme pursues here in this space with a number of new elements. ’98.5’ is a large creation by the Moroccan Soukaïna el Idrissi, for which she weaves and sews 98.5 kilometres of cut ribbons from recuperated plastic to create a textile like checkerboard; then we find a new work by the African Moffat Takadiwa who uses cast off toothbrushes and bottle tops to braid and entwine, creating a modern multi-coloured wall tapestry, and completing this sort of triptych, we find the standing sculpture of the Moroccan Noureddine Amir called ‘The head of the Medusa’ made of recuperated metallic scouring pads painted a deep red. There is also a pedestal with 5 coloured vessels made from recuperated bioplastic granules by the Dutch duo Rutger de Regt and Marlies van Putten.

The dialogue between civilisations and epochs does not end there. The juxtaposition of African ‘masques malades’ with an equally distorted portrait by Francis Bacon, the huge Narwahl Tusk elucidating the tapestry of a unicorn and then near the entrance the 3 ‘Divine Proportion’ sculptures connect us to the end of the 15th century. On the other side of the room the ‘Divine’ manifestation of a 16th century Catalan Christ in interlocution with Ambrym idols from Vanuatu carved out of giant tree ferns, and a vitrine with other confessional artefacts from Peru, China, Egypt and France.

The assemblage of vessels made of old tires in present-day Morocco continue to be modelled on archaic forms.

The classical art works in the room are represented by the duo of masters – Miquel Barceló and Gerhard Merz, while the work of Ben Jakober and Yannick Vu figure through their pieces ‘The Golden Pacifier’, ‘Planta Cara’ and ‘Escudo’.

The kinetic installation "Butterfly" (1995) by the artist Rebecca Horn flaps its wings as soon as one approaches. It is a blue glowing morpho butterfly, native of South America, Mexico and Central America. This vibrating colour leads us to the highlight of the space which is of course the special room at the end built for James Turrell’s 1968 seminal ‘Juke Blue’ a mystic meditative experience in itself.

A journey that reveals another form of understanding art and its links with space and time.

next
Tagged under
top